I love hand dyed yarn. It's so unique and pretty and you never know how it's going to knit up. My friend Sara is hosting a speckle-along on Ravelry and you know I jumped at the chance to break out my one hoarded skein of speckle yarn.

But then, suddenly, one skein of speckle yarn just wasn't enough. I wanted more speckles! So I looked around and was immediately disappointed to find that all the prettiest colorways were sold out. No matter where I looked. I was so sad, I might have been feeling just a tad sorry for myself...okay, if I'm being honest I was pretty sure it was the universe's way of telling me I wasn't good enough and didn't deserve speckled yarn.

It was during this dark moment that I though "just how hard would it be to dye my own speckle yarn?" I spent hours watching videos on wool yarn dyeing. And it all seemed pretty easy and fun! I mentioned it to Sara and when I was literally 30 seconds away from buying some dyes online, she offered to sell me her wool dyes and equipment.

And when the box got to my house, I was blown away by the number of different dyes inside. There must have been 50? I don't even know. But what I DO know is that dyeing yarn is so, SO fun!

While the camera doesn't capture the true depth and intricacies of the colors, I wanted to show you all my first attempts at yarn dyeing anyway. I'm officially hooked!

I started by making mini skeins from a cone of undyed yarn that Sara sent. Most I dyed open like the skeins on the left but two I dyed wound up, one tightly (middle) and one loosely (right). 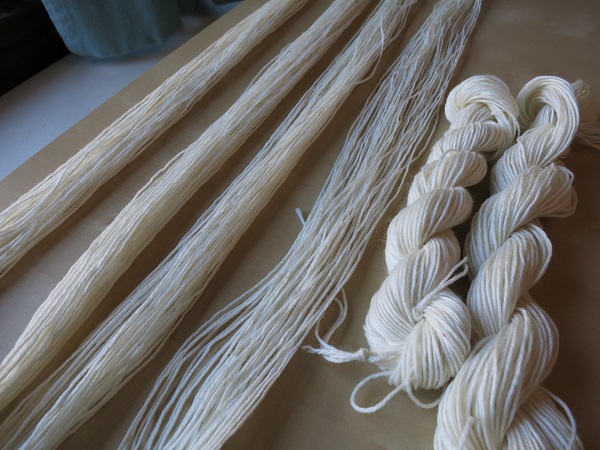 I wanted to replicate a sunset I saw the other day, steely gray with hints of apricot. 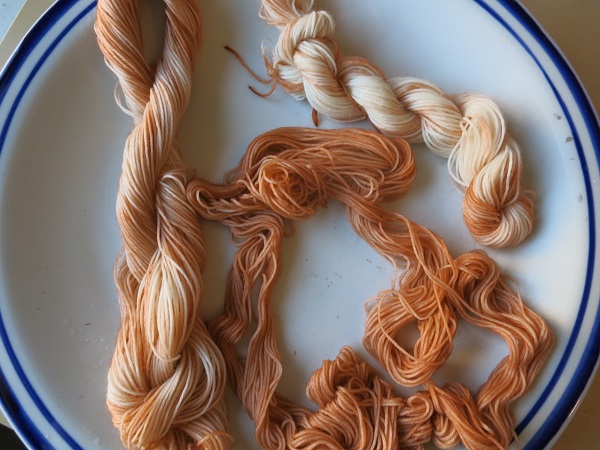 So, I started with an apricot dye bath. When they were finished, I re-twisted the two mini skeins and put them in a gun metal gray dye bath. The skein that was twisted tightly was mostly white, the one twisted loosely was mostly dyed. 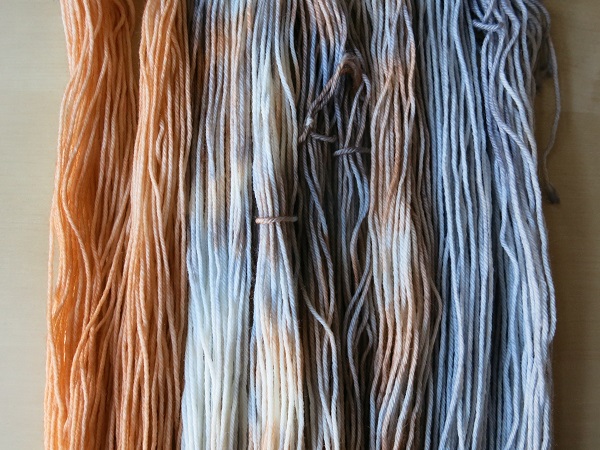 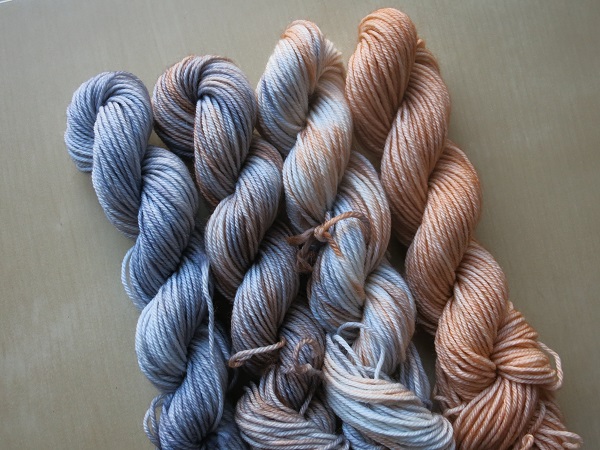 After that experiment, I just tried whatever I felt like. I tried two different (but similar) colors in one pot to create variegated skeins. 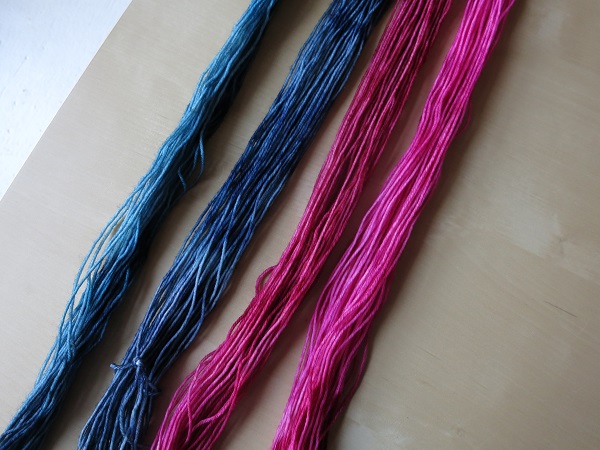 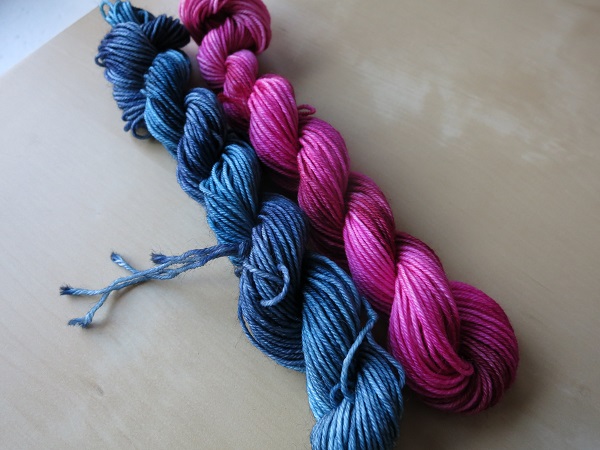 I did some gradients. 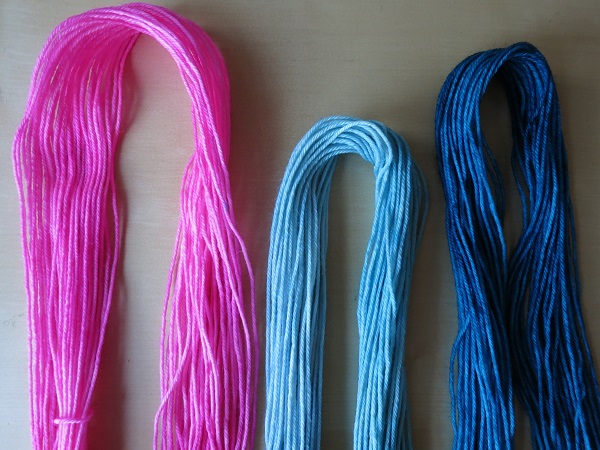 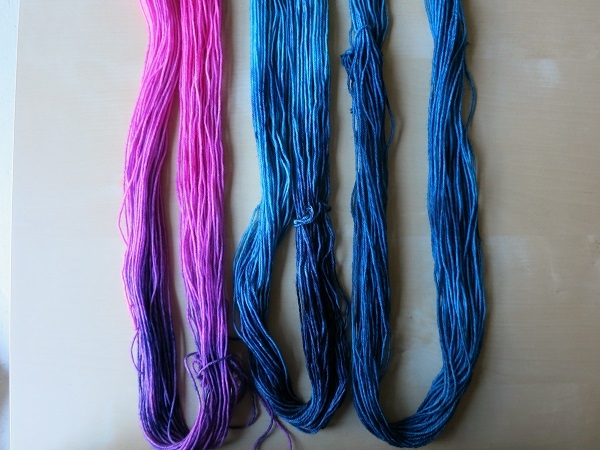 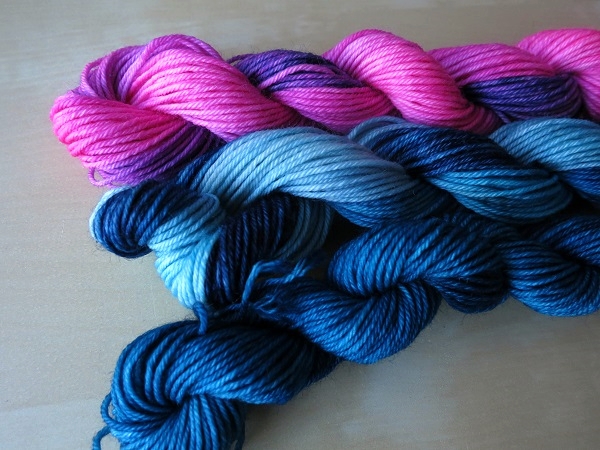 And I tried speckles! 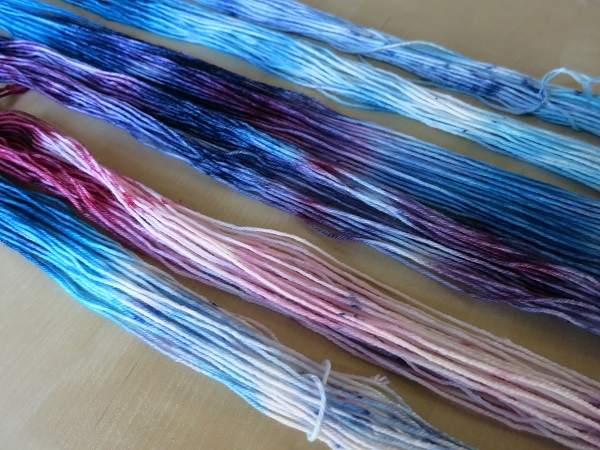 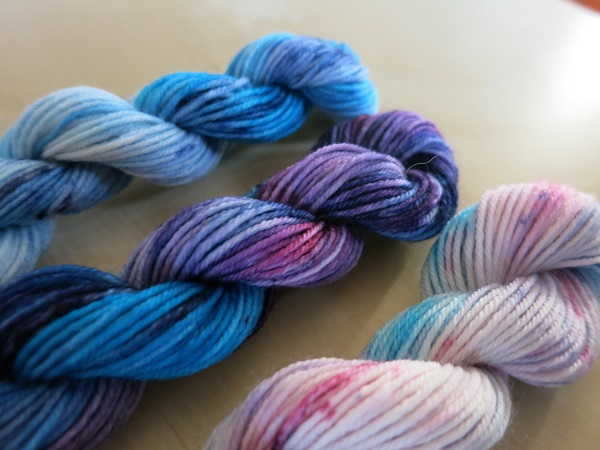 And for all that, I only used 6 colors! I'm looking forward to trying all of the colors and creating my own combos and making pretty things with my own yarn. I may never buy hand dyed yarn again!
Labels: yarn dyeing